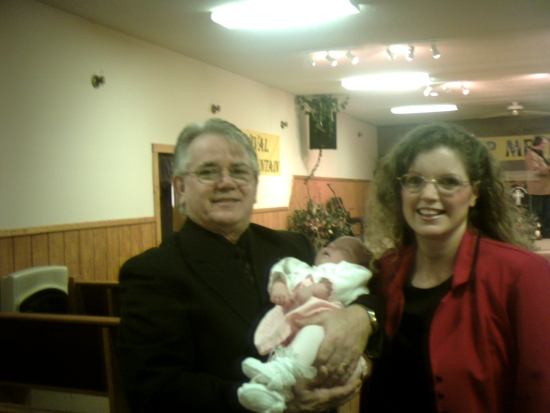 My Dad was a carpenter and a contractor all my life. They were (from Florida) working in Georgia when I was born. In a few days they moved back to Florida and that's where I was raised. I can never remember my Dad being anything but a carpenter and a preacher so church was something I grew up in. He would follow the great Evangelists when they came near our town. I remember, A.A.Allen and Schambaugh. I remember Talk about Jack Coe and Leroy Jenkins. This was almost a lifestyle for us. As a young man I knew that God was laying ground work in a place I would one day walk. I knew He would use me in Healing someday. In my teen years I began playing the guitar and could do it pretty well so I would sneak off with a friend and play in bars on weekends. This would eventually lead to addiction and more problems than I ever imagined. To make it short. I now carry the same message that I bucked against so many years ago. God uses us in Divine Healing and the Prophetic and our country style music has opened doors around the country for us. We have been able to sing or be on stage with such people as Gerald Crabb, Chuck Compton, Eric Hinson, The Conners just to name a few. A year ago in March God blessed us with a little girl. We named her Rebekah Faye Horn. What a blessing she has been.

Raised in Indiana Rachel's Dad traveled with several local evangelists. He had a gift to lead worship and since he played guitar also he was welcome and most any revival meeting. They traveled in Kentucky, Illinois, Virginia and at a very early age she had already seen a great deal of the country. Because he had a gospel group that traveled with him and because he was gifted in music, it would be no surprise to learn that Rachel too, had a gift to sing. Rachel's Dad died when she was a teenager so she spent her teen years with step parents. The music did not stop. Her step mother was a musician also so Rachel's love for music continued. Keeping up with the songs and the singers and her talent has also allowed her to be on stage with some of the greats. It is her commitment to music that has pushed this group to places we never thought possible. Her desire is to help the hurting. We are praying Rachel will be able to do a project of her own in the near future. Many people have asked about it; now you can help us pray.

Always keep us in your prayers and when you pray, pray we never lose our vision. It's not about us; it's all about HIM.